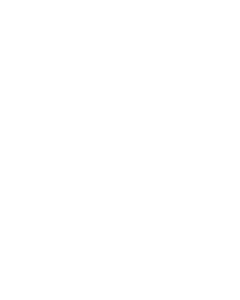 Please join us for our next chapter meeting!

Get the Details!
Zoom Meeting Link

*links will be updated the day before each chapter meeting.

There is no zoom meeting available for the April chapter meeting. 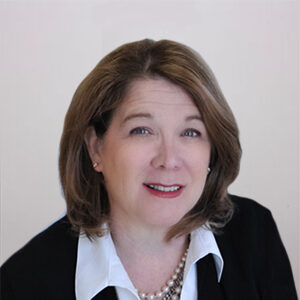 It’s Azalea Festival week and Wilmington is looking gorgeous! I hope you will take the opportunity to enjoy this beautiful place we call home.

It is a busy time for our chapter as we move through this spring. We have much to be excited about beginning with our April chapter meeting a Jen Sturm’s house (she is providing the dinner and she is a wonderful cook).

It is also only a couple of weeks until our State Conference (April 21st -24th). It should be a very exciting conference. I want to encourage everyone to attend, even if it’s just for the day, it will be a wonderful opportunity to see our state officers in action.

The Yard Sale date has been moved to June 4th. Debbie Wallace, her wonderful husband, and I have been organizing the yard sale merchandize. We would love to have more items to offer so please call, text, or email me to arrange a private drop off time. We need everyone’s help to make this a successful fundraiser for our chapter.

Finally, we need a new Constitution Committee chairman. We have great plans in place but need someone to volunteer to lead this very important committee.

Please attend as many of these events as possible. Your participation and presence are essential to the success of your chapter and to the fun we all enjoy together.

The First Meeting of the Genealogy Club Was a BIG Success!

The first ever meeting of the Wilmington Ladies Tea Walk Chapter, D.R.A. (Daughter’s Researching Ancestors) took place on Thursday March 31st at the downtown branch of the New Hanover County Library. The meeting featured a guided tour of the North Carolina Room by librarian and historian Joe Sheppard. What an incredible amount of information on the resources at our own public library! The tour included instruction on how to use the microfilm, find local church and real estate records from the colonial period, and a look at the Bill Reaves Collection Room where 100+ years of Wilmington newspaper articles have been preserved.

The meeting was followed by a dinner at Elijah’s Restaurant. Thank you to all the ladies who braved the stormy weather and made this a fun and informative event.

Coming soon… information on our next D.R.A. genealogy meeting.

Click on image to enlarge. All photos courtesy WLTWDAR Archives. 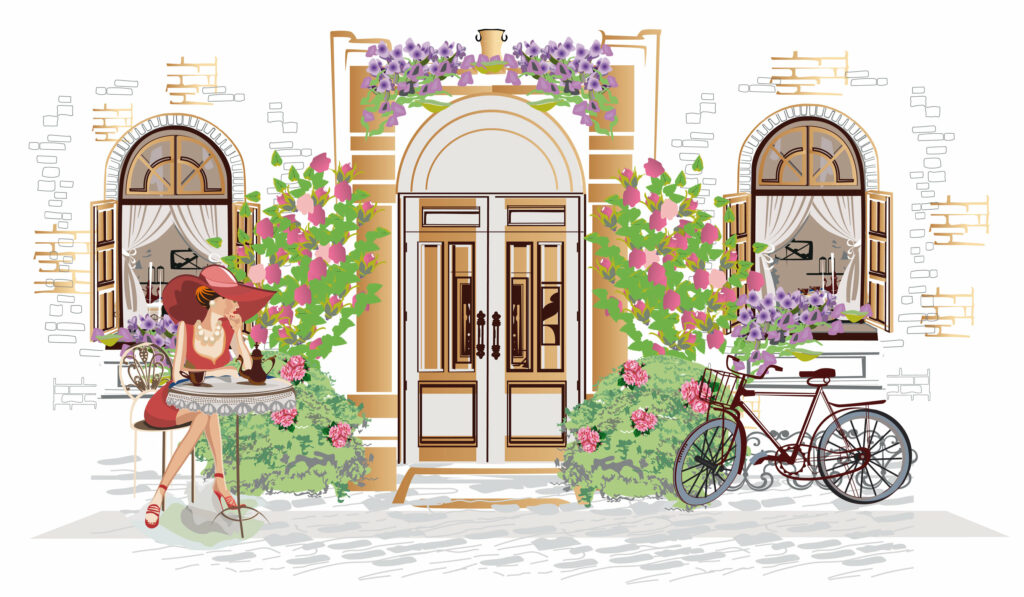 Please join Wilmington Ladies Tea Walk Chapter, NSDAR, for our annual May Luncheon. This May we are doing something different, with a more casual feel, to celebrate a very productive, patriotic, fun, year of DAR sisterhood. Wear your favorite hat or fascinator for this open- air event at Far From France Restaurant.

We still have room for three more. Contact Ann Moore at [email protected] if you would like to join us.

Program: “A Year in Reflection” 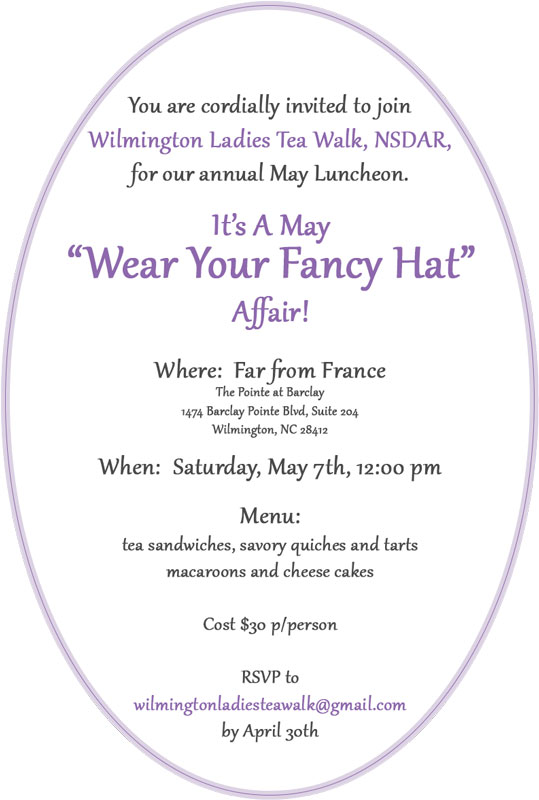 Please continue collecting your items for our first ever yard sale.
It’s going to be a huge fund-raising event and we need your donated items to make the sale a success! Please no linens or clothes.

Donation drop-off by appointment
Please contact Ann Moore by email [email protected] or give her a call (910) 233-3780 to schedule a drop-off time. 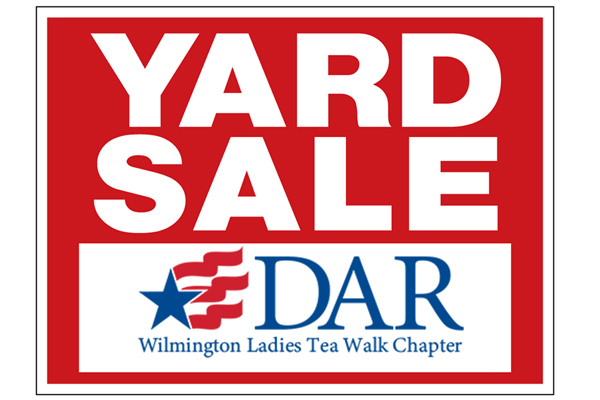 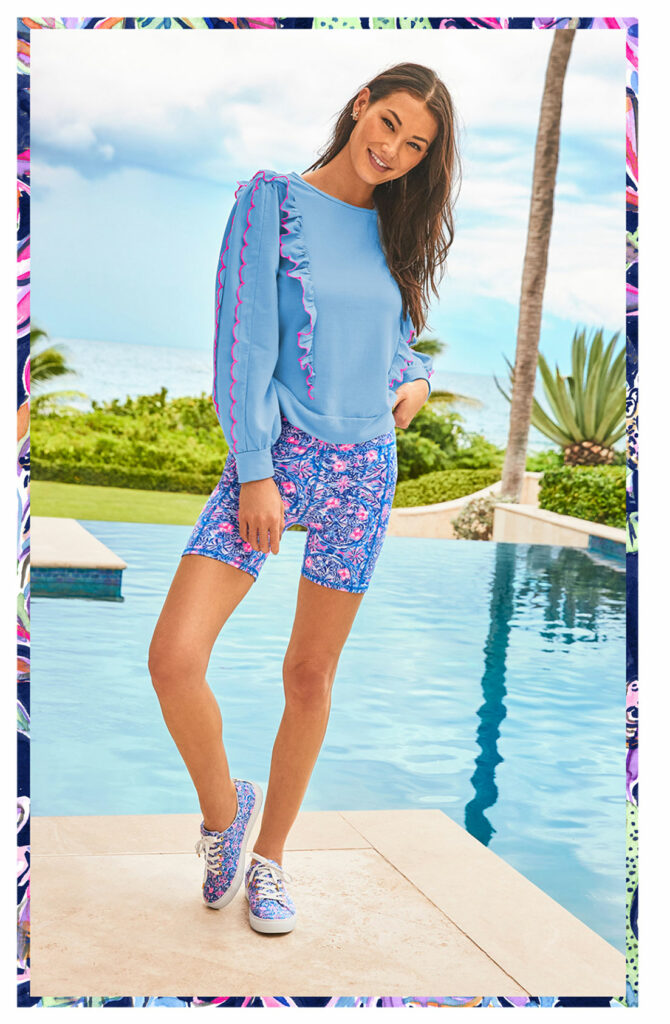 Thanks to all who purchased to give in our Shop and Share with D.A.R. & Lilly Pulitzer!

Please take a moment to click on the link below concerning “Thank You” letters to be given to the 75 Honor Flight Veterans that return home on April 30th at ILM. This is something that we can all do to show our gratitude for these heroes. We will have more information at the April meeting.

Get the Link Here...

Library Committee
The Book Club is Back!

Please purchase a book through the library. It is a Chapter goal that everyone in purchase at least one book. I am really excited about starting up the book club once again. The first book we are reading is The Widow’s War: A Novel by Sally Gunning. Please let Megan know if you are interested.

It is time to start your spring cleaning and planting if you have not already done so. We are seeing bees, butterflies, and other pollinators so let the dandelions be, fill the bird and hummingbird feeders, and clean and fill your bird baths to attract these beautiful creatures to your gardens.

Please remember and… this is important…DO NOT USE RED COLORING in your hummingbird feeders. The store bought stuff poisons them. All that is necessary is filtered water and sugar. To make the nectar at home be sure to first properly clean the feeders with vinegar and water. After soaking for an hour, give them a good scrub and allow to air dry. Time to make the nectar… combine 1 cup of pure Cane sugar and 3 cups of filtered water in a pot over medium heat on the stove. Simmer, stirring frequently until sugar dissolves. Allow the nectar to completely cool before funneling into your feeders. Hang up outside in an area that is not in direct sunlight. Store the extra nectar  in a glass jar in the fridge. Be sure to change out or refill the feeders at least on a weekly basis.

Test how much you know about Old Glory by taking the true or false quiz  below. It’s a fun way to check out these 5 not-so-common, but very interesting facts about the American flag.

Keep up to date with your officer and committee roles and goals!  Below are some of the classes, workshops, and webinars to assist in learning more about our DAR organizations and positions.

The Protocol Committee was confirmed as a special committee in 1971 and became an administrative committee in 1977.
The committee serves to give members guidance in the ceremonial forms and courtesies that are established as the proper and correct etiquette for recognizing and honoring those in positions of leadership, remembering always that the fundamental principles of protocol are dictated by ethics, courtesy, good manners, and common sense. 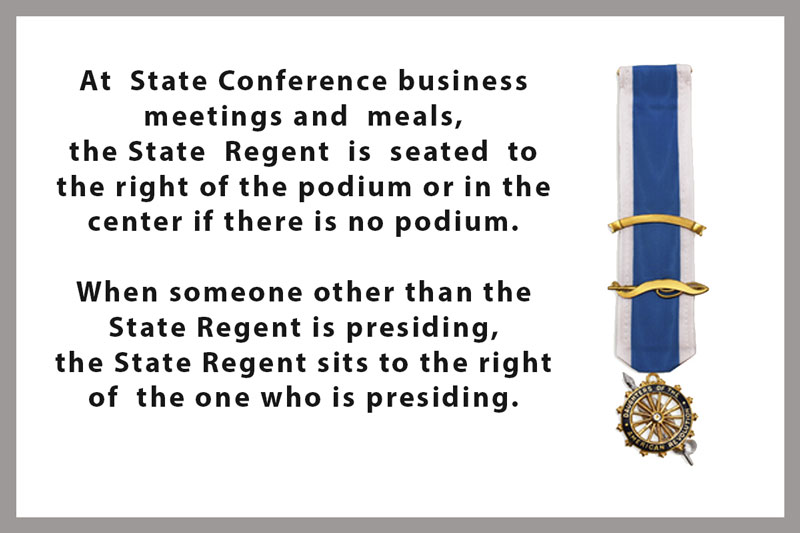 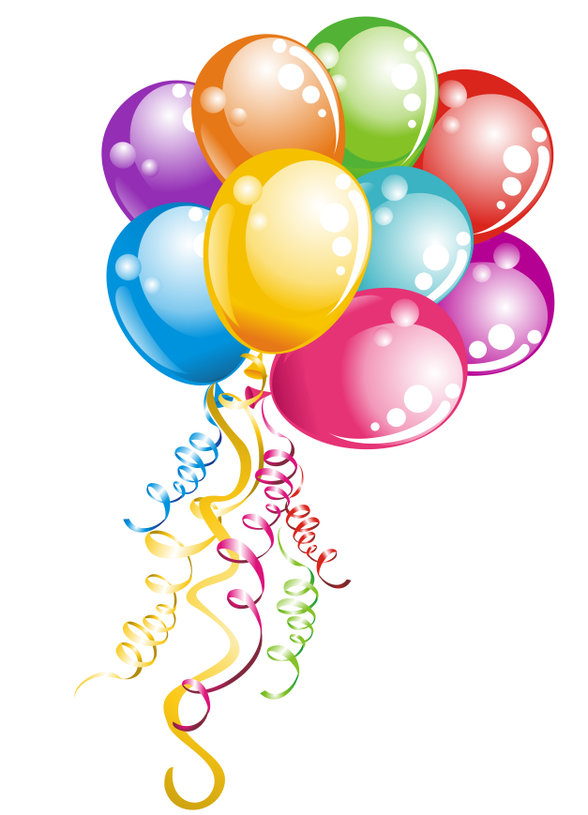 It is with deep sadness that we share the passing of one of our members, Carol Bridges.  Carol joined WLTW in 2013,  She was active in our chapter by sending birthday cards to our members and headed up a fund raising effort to raise resources for a very needy veteran’s family to ensure they had a happy Christmas.  Please keep her family in your prayers for comfort during this difficult time.  Her obituary is included below.

Carol was born in Amityville, Long Island, New York, and was delighted if anyone asked her where she was born. She would then claim to be a “Yankee” with mischief in her eyes. People usually looked at her questioningly since she definitely had no New York accent. She would then quickly add that she probably had “Yankee blood” because her mother received a blood transfusion in the hospital. In truth, she lived there 10 days before her family returned home. Most of her early years were spent in Danville, Virginia; Montgomery, Alabama; and Columbus, Georgia. Carol was a life-long Methodist (mostly), the granddaughter and great-granddaughter of two Methodist preachers, and she loved to sing. She had fond memories of her time as a teenager and college student with The New Creation, A New Mind, and Epworth by the Sea, formative groups and places where she sang and experienced God’s love in community. Her favorite place at church was always choir, an activity she and Tom enjoyed together.

She spent her working years in Charlotte, NC, where she taught kindergarten, first, and second grade; and then retired to Carolina Beach, where she lived 805 steps from the beach. (Yes, she counted them herself!) In her retirement, Carol enjoyed volunteering with the Federal Point Help Center, Pleasure Island Sea Turtle Project, and the Island Women Literacy Committee, where she helped bring seven “Little Free Libraries” to the island. As a former literacy specialist, Carol loved maintaining the Little Free Library in her yard and especially focused on quality children’s books for the children who passed by. Carol loved fiercely. Anyone who came into her orbit felt her genuine warmth and generosity. She knew how to make people feel special and gave the best of herself to her friends and family.

A service, officiated by the Rev. Shawn Blackwelder and Gayle Tabor, was held at St. Paul’s United Methodist Church on Friday, April 1. In lieu of flowers, the family requests donations be made to the St. Paul’s UMC building fund. (https://stpaulscb.org/giving/).

Jayden Sturm made her C.A.R. debut on March 26 held at the hotel Ballast in downtown Wilmington NC. 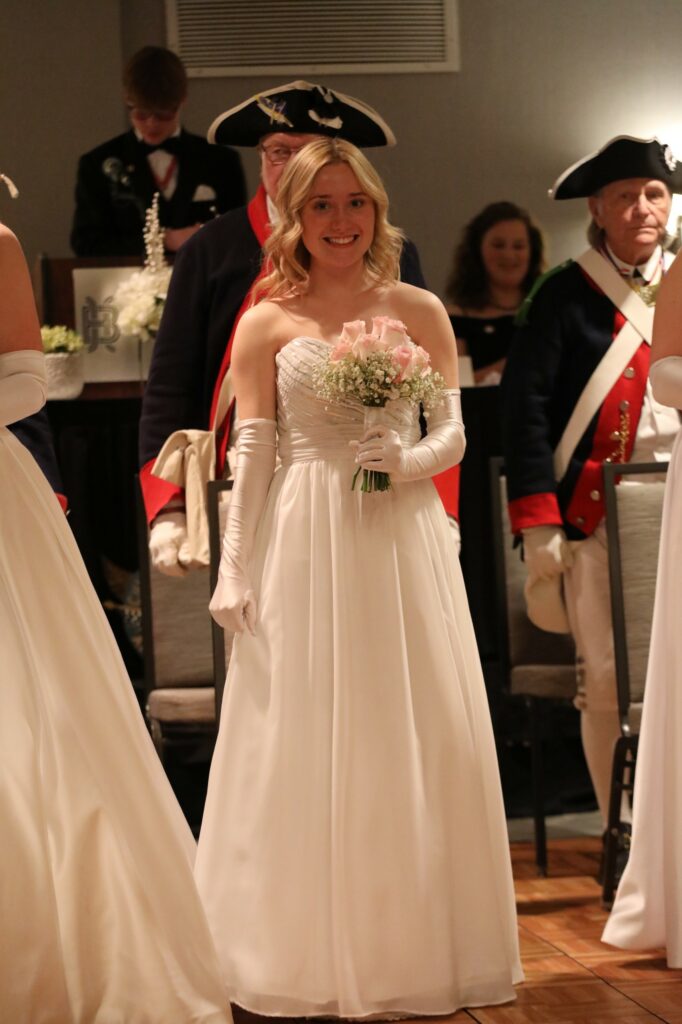 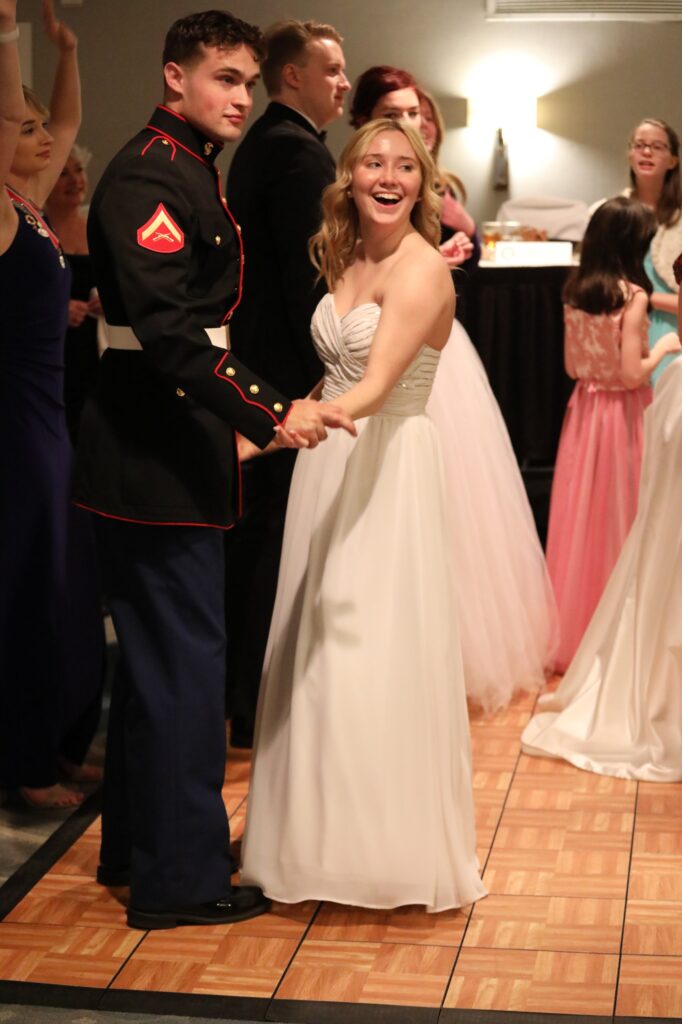 Visit these DAR publications and messages to see what’s happening on the state and national levels. 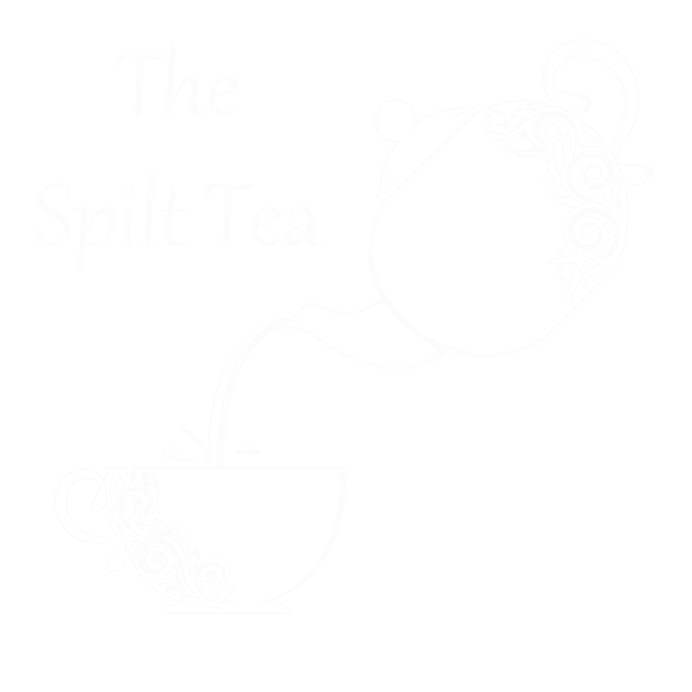 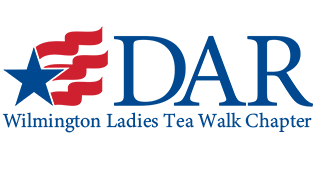